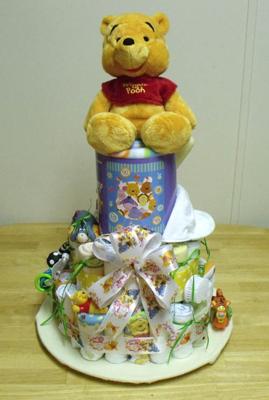 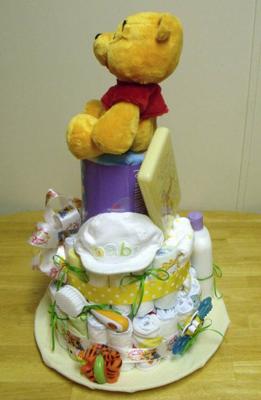 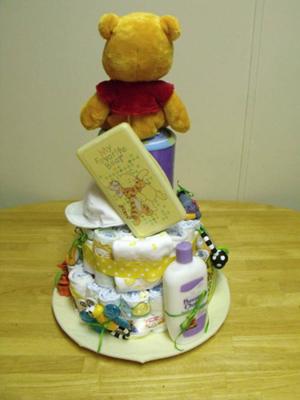 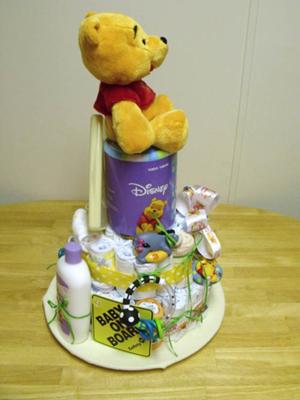 In her own words:
I started by following the directions on this website, which were very helpful. However, I did tweak it a bit. For the center rows (that are hidden) I rolled the diapers without opening them up. They didn't look as neat, but were much easier to roll. I had worried about not having enough diapers, so I didn't roll them up as tight for the inside rows. I used small, plastic hair bands to hold the diapers, and rubber bands to secure the entire rows.
I used a baby shampoo bottle for the center. After making the first two tiers (size 1 for the bottom, and newborn for the middle), I used a Winnie the Pooh fleece blanket (rolled up) for the top tier. (I used straws to secure the blanket to the middle tier). For the cake topper, I used a cute, cuddly and soft Pooh bear (had to use a chopstick to secure him to the top tier, and to make sure he was sitting up!)

Now came the fun part: decorating! Since the sex of the baby was a surprise, I used neutral baby colors. I purchased several bibs, some onesies, a hat, a small wipe holder, and some toys. I also had a bottle of lotion that I ended up not using for inside the cake. I rolled up the bibs and onesies to be about the same size as the diapers. I then replaced some diapers with the rolled up bibs and onesies to add some color. I placed the toys on the cake using either tape, or tying them with ribbon. I used some yellow polka-dot ribbon for the middle tier, some very cute Winnie the Pooh ribbon for the bottom, and thin, green ribbon to add the decorations, and for some pop of color. I also made the the huge bow out of the Pooh ribbon.

All together, it cost be about $70-$80 to make. I did purchase the bibs and onesies at a thrift store. Everything else was bought at K-mart or Wal-Mart. And to offset some of the cost, some family members donated some money in exchange for signing their names to the card, so they wouldn't have to buy a gift. It only took me about 1 1/2 hours to do the entire thing, from rolling diapers to decorating. The hardest part was shopping around for all the stuff!

I think the cake turned out so great! Every one was very impressed! I had so much fun making it, and can't wait to make another.