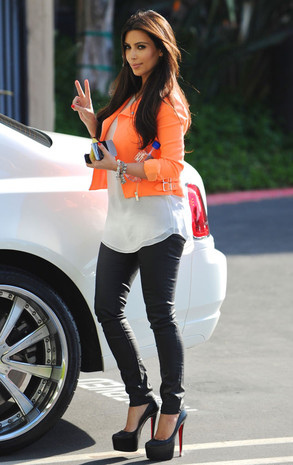 The poshness began days before the shower when the baby shower invitations were sent out to family and friends including Beyonce and Fergie. The invites were music box invitations with twirling ballerinas.

The lavish shower started at 11:30, with the guest of honor, Kim, arriving with her sister Khloe in a white Range Rover.  Guests were met with valet parking and some eclectic music playing on the patio.  Most of the family and the guests who attended the baby shower were dressed in white.  The mommy-to-be was wearing a long, flowing white gown.

The Beverly Hills home was decorated with white drapes and hundreds of white tulips and white roses for the occasion.  Each guest was given a floral garland of white Baby’s Breath to wear in their hair for the 3 hour event.

The Kim Kardashian baby shower began with a delicious brunch buffet of omelets, bacon, pancakes, waffles, lox, bagels and mimosas to drink. The dessert station was themed pink in celebration of the baby’s gender, which was revealed on the previous Sunday’s reality show ‘Keeping Up With The Kardashians.’  There were pink lollipops, pink cotton candy, and strawberry shortcake.

After the brunch, the guests played baby shower games, including baby name guessing. Then the guests enjoyed watching Kim open baby shower gifts.  Even though Kim and Kanye asked that in lieu of baby gifts that their guests make donations to the Lurie Children's Hospital of Chicago, they were still showered with some posh gifts from the Los Angeles baby boutiques Petit Tresor and Bel Bambini.  Some of the gifts included a Victorian doll’s house, pink cashmere outfit, a gold Cartier eternity bracelet encrusted in diamonds, and a Porsche 911 buggy.

The mommy-to-be expressed her excitement via Twitter:  "WOW an amazing baby shower! So much luv there Thank u @KrisJenner @KourtneyKardash @KhloeKardashian Shelli & Allison Azoff 4 the magical day," Kim tweeted. "Truly such a special day. I honestly feel so blessed and filled with so much love!"