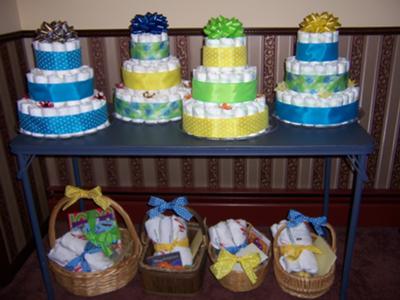 Simple is stylish, as you can see with these 4 Classic diaper cakes below. These cakes were made for a "Teddy Bear Tea Party" themed baby shower. Brianne is the creator of these colorful diaper cakes and not only shared some photos of her darling cakes, but she also shared some excellent instructions, tips and advice on how she made them. So nice!! Such delightful looking cakes and such helpful description and detail as to how she made them. Brianne is another of our fabulous readers who took of her time and talent to share her diaper cake ideas with the rest of us. We have the best collection of diaper cake ideas on the internet because of all of our readers' contributions. We all benefit from their creativity and ideas, like Brianne's! Thanks so much for sharing, Brianne!

I recently helped to plan a shower for FOUR ladies (we all belong to the same singing group). The theme was a "Teddy Bear Tea Party" and so I decided to make classic cakes that actually looked like dessert (didn't want to glue baby items on the outside). At the shower the four cakes were set up on a long table with a large teddy bear and a gift basket on either side of the cake.

Each cake was built around a paper towel tube with a receiving blanket wrapped around it (this made for a really nice sized cake that exactly fit one large package of 66 diapers). The bottom layer has three rings of diapers, middle has two, and top has one. From dollar stores I picked up round plastic platters, thick ribbons, bows, and artificial flowers (I cut some of the flower heads off and stuck just four of them in the bottom layer of the cake). Each cake cost about $25.

I found that the cakes were easy to make once I figured out how to do it (thanks a LOT to this website!), but it was time-consuming. Including the time it took to shop for the right accessories and cut/glue the ribbons, I would say I spent about 12-15 hours over the course of a month making the four cakes.

I'd like to share some tips that I think could really help people:
1) Put the rubber band for each ring of diapers around the center first and then slide in the diapers. It is very difficult to set diapers up and then hold them in place while you put a rubber band around them.
2) When you're rolling the diapers, make sure they're not banded too tightly. If they have an indent where the band is, they won't stack as well and they could be damaged.
3) At first I made a larger cake but it was so heavy it didn't work. I think a smaller, nicely decorated cake can look really great. Check out my pics!